Requirements for standpipe systems are found in Section 905 of 780 CMR Massachusetts State Building Code (9th edition), including various triggers for when a standpipe system is required for a building.  Within 780 CMR §905 and NFPA 14, Standard for the Installation of Standpipe and Hose Systems, three classes of standpipe systems are identified which vary based on the type of hose connections (aka fire department valves, hose valve) and/or hose stations required, the locations thereof, and the intended uses during a fire event. These three classes are differentiated as follows:

Historically, many buildings were required to have 1½-in. hose stations (i.e., Class II or Class III standpipe systems) intended for use by building occupants during a fire event. As automatic sprinkler systems became more commonplace, the fire protection industry and fire service generally shifted towards reliance on sprinkler systems applying water during the initial stages of a fire event – before arrival of the responding fire department – in favor of evacuating the building occupants to safety in a more timely fashion.  As a result, 780 CMR §905 includes several exceptions that allow installation of only a Class I standpipe systems in many cases, and a majority of buildings being designed and constructed under today’s code are permitted to only include 2½-in. hose connections. These classes of standpipe systems in 780 CMR are consistent with NFPA 14 Standard for the Installation of Standpipe & Hose Systems, the reference standard applicable to the design and installation of standpipes. 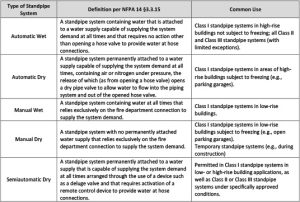 For more information on the types of standpipes systems please contact us at info@crcfire.com